To Dance, or Not to Dance, That Is the Question…

Did you know that dancing for fun in NYC is prohibited in most bars, restaurants and clubs? Even more startling is that unless the dancing is a performance it is not recognized as protected expressive speech under the First Amendment of the United States Constitution. As a result, Cabaret licenses are one of the most hotly debated and disliked licenses issued by the Department of Consumer Affairs.

The Cabaret License is required for establishments that serve alcoholic beverages or food, and allow patrons to dance inside the premises. The application is lengthy and requires the establishment to overcome a series of regulatory hurdles.

The New York City Cabaret Law was instituted in 1926 — in the times of prohibition, when liquor was bootlegged and speakeasies were the locales of choice. The Law required that eating and drinking establishments obtain a Cabaret License before allowing live music or dancing on the premises.

In 2006, eighty years later, the New York City Cabaret Law was challenged on First Amendment grounds. Festa v New York City Dept. of Consumer Affairs, 2006 NY Slip Op 26125 [12 Misc 3d 466]. In the Festa case, the Plaintiffs, which included the Gotham West Coast Swing Club, a non-profit swing dancing club, argued that “participatory social dancing” (i.e. dancing for the fun of it), as an activity, constituted protected speech under the New York State Constitution. The Plaintiffs alleged the Cabaret License and associated zoning laws were, therefore, unconstitutional and in violation of the First Amendment as well as their right to due process of law.

In the Festa case, the Court adopted the reasoning of a prior US Supreme Court case, and held that “participatory social dancing” was not expressive speech. Social dancing, the Court held, did not involve expressive association, i.e. performances as expressive conduct. Finally, the Court denied the Plaintiffs' constitutional challenge to the Zoning Resolution and found the Zoning Resolution provisions to be “a reasonable exercise of the police power and bear a substantial relationship to the health, safety and general welfare of New Yorkers.”

The Cabaret Law Is Still in Full Force and Effect in NYC — Making It Illegal for Patrons to Dance for Fun in Most Bars, Restaurants, and Clubs

Obtaining a Cabaret License begins with the Department of Consumer Affairs (DCA). The applicant must establish first and foremost that its establishment is located in a zoning district that permits dancing. Thereafter, the establishment may be inspected for compliance with all applicable fire and safety regulations and electrical and building codes. The establishment must also face its local Community Board, who may then give a favorable or, more likely, unfavorable recommendation to the DCA.

Licensing Fees for your Cabaret License are reflected in the chart below, provided by the DCA: 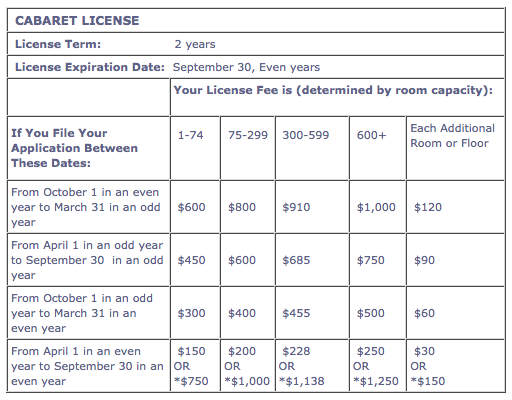 For establishments that fulfill the zoning requirements, comply with all the fire and building codes, as well as other regulatory constraints, and that satisfy the local community, let the dance begin (after receiving approval from the New York City Department of Consumer Affairs, of course).