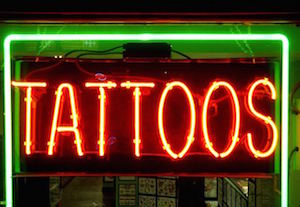 Copyright is a legal term used to describe the right to control the use of an original work such as a movie, book, or piece of artwork that was created or is owned by an individual or company. Increasingly, copyright disputes are arising across the nation over tattoo designs. In 2011, the artist who created boxing champion Mike Tyson’s facial tattoo settled a copyright infringement lawsuit against Warner Brothers Studios. According to a complaint filed in a Missouri federal court, S. Victor Whitmill owns and previously registered the tattoo design that is permanently inked on Tyson’s face. Whitmill claims the studio used an identical design on an actor in the movie The Hangover Part 2 without first obtaining his permission or providing him with compensation.

Although Judge Catherine D. Perry stated a tattoo may be copyrighted, she refused to grant Whitmill’s request for an injunction to block the release of the movie because the financial effect of doing so could harm non-parties to the litigation. According to Warner Brothers, the tattoo was mere parody and subject to the fair use exception in the United States Copy Right Act. Judge Perry reportedly disagreed. After she stated Whitmill had a strong likelihood of prevailing against the movie studio, the case settled out of court following mediation. After its release, the movie grossed more than $500 million.

Since that case settled, a tattoo artist reportedly sued video game maker THQ Inc. for creating a game character, complete with identical tattoo, which resembles a mixed-martial-arts athlete. Additionally, the National Football League Players Association apparently issued a warning to players to seek copyright waivers for any tattoos that may be displayed on television or using other forms of media. Some attorneys purportedly think signing a copyright waiver will become a prerequisite to obtaining a tattoo in the future. Despite the apparent rise in litigation over tattoo rights, however, Saint Louis University School of Law Professor Yvette Liebesman believes all tattoo artists provide their subjects with an implied license.