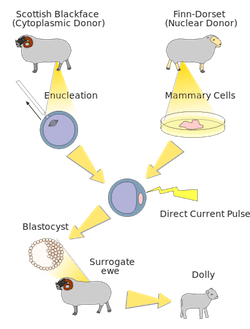 A sheep named Dolly made history in 1996 as the first mammal to be successfully cloned using DNA from an adult cell. The Roslin Institute (“Roslin”) in Scotland, where Dolly was born and lived out her life, applied for several patents from the U.S. Patent and Trademark Office (USPTO), including the method by which Dolly was cloned and Dolly herself. The USPTO denied the application to patent the cloned organism herself. The Federal Circuit Court of Appeals affirmed the denial, citing precedent cases that held that “natural organisms” are generally not patentable. In re Roslin Inst., No. 2013-1407, slip op. (Fed. Cir., May 8, 2014).

According to AnimalResearch.Info, Dolly was the only successful attempt, out of a total of 277, to clone a sheep using DNA from an adult cell, a process known as the somatic method. Prior successful experiments cloned cows, mice, and frogs using embryonic DNA. With Dolly, scientists took an udder cell from an adult Finn Dorset white sheep and injected it into an unfertilized egg cell from a Scottish Blackface ewe, after removing the egg cell’s nucleus. They used electrical pulses to fuse the two cells and then cultured the fused cell for about a week to see if it began to develop. A different Scottish Blackface ewe served as surrogate. Dolly was born on July 5, 1996. She remained at the Roslin Institute her entire life, where she reportedly “lived a pampered existence,” mated, and produced several normal offspring. Due to complications from arthritis and a tumor in her lung, Dolly was euthanized on February 14, 2003.

The scientists who led the experiment obtained a patent on the somatic method as it pertains to cloning mammals. They assigned the patent to Roslin. They also applied for a patent on the actual clones that could be produced from the somatic method. The USPTO examiner rejected the application in 2008, finding that the subject matter did not fit the statutory standards for patentability under 35 U.S.C. § 101. The examiner also found that the subject matter was “anticipated and obvious,” and therefore not patentable. Roslin, slip op. at 4, 35 U.S.C. §§ 102, 103. The Patent Trial and Appeal Board (PTAB) affirmed the examiner’s findings, ruling that the subject matter did not have “markedly different characteristics than any found in nature.” Roslin, slip op. at 4.

The Federal Circuit affirmed PTAB’s ruling, citing multiple Supreme Court cases finding against the patentability of “naturally occurring organisms.” Id. at 5; see Funk Bros. Seed Co. v. Kalo Inoculant Co., 333 U.S. 127 (1948); Diamond v. Chakrabarty, 447 U.S. 303 (1980); Ass’n for Molecular Pathology v. Myriad Genetics, 133 S. Ct. 2107 (2013). The Supreme Court held in Funk Bros. that several strains of bacteria were not patentable because the applicant did not do anything to alter the bacteria, leaving them indistinguishable from those found in nature. Chakrabarty allowed a patent on a bacterium that had been substantially modified. Since Roslin admitted that Dolly was “an exact genetic replica of another sheep,” Roslin, slip op. at 7, the court ruled that she was not patentable.

Korngut Paleudis LLC’ intellectual property attorneys have represented clients in New York, New Jersey, and Connecticut for more than 45 years. To speak with a knowledgeable and experienced advocate about your business or commercial law matter, please contact us today through our website or at (212) 949-0138 in New York City, (914) 220-8270 in White Plains, or (203) 355-3635 in Stamford, Connecticut.