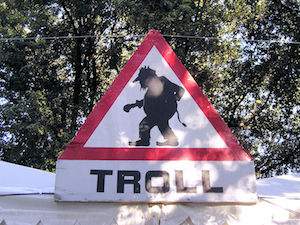 The Attorney General of New York has entered into an unprecedented settlement agreement with a patent assertion entity (PAE) regarding an investigation of allegedly deceptive tactics. A PAE, commonly known as a “patent troll,” purchases and enforces patents as its sole or primary business activity. PAE’s frequently demand payment of licensing fees from businesses in order to avoid patent infringement litigation. The New York settlement limits how the PAE may inform New York businesses of alleged infringement. At the same time, the PAE filed what it calls a “preemptive” lawsuit against the Federal Trade Commission (FTC), claiming that a planned lawsuit by the FTC exceeds the agency’s authority and threatens to violate the PAE’s constitutional rights.

PAE’s are controversial in part because they generally do not invent anything, but rather purchase patents from others. Their principal source of revenue consists of license fees, settlements, and damage awards. In many cases, PAE’s do not exploit the patents they hold in any way other than patent infringement claims. PAE’s frequently assert claims against large technology companies like Apple, but they also target small businesses who might not be able to afford the cost of disputing the claim.

The PAE in the present case, MPHJ Technology, holds several patents covering the process of quickly scanning and emailing documents. It reportedly purchased the patents in 2012 for $1. A report in Wired states that MPHJ primarily asserts claims against small businesses that might have purchased photocopiers and scanners, rather than the much larger companies that manufacture such devices. The company has 101 subsidiaries that it has used to send patent infringement claims to more than 16,000 small businesses, typically offering a choice between paying $1,000 per employee for a patent license, signing an affidavit stating that they do not use the technology, or facing a lawsuit.

The New York Attorney General began investigating claims of “strong-arm” tactics used by MPHJ against New York small businesses, including using subsidiaries that make it difficult for businesses to evaluate their patent claims, and using false claims regarding license agreements with other businesses. Under the settlement agreement, MPHJ must make initial contact with a company under its own name rather than that of a subsidiary, must not make an initial cash demand, and must refrain from false statements about settlements with other businesses. The Attorney General described the terms of the settlement as “the minimum standards” that “patent trolls” must follow to avoid claims of deceptive trade practices.

On the same day that it executed the settlement agreement in New York, MPHJ filed suit against the FTC in a Texas federal court. MPHJ Technology Investments, LLC v. FTC, et al, No. 6:14-cv-00011, complaint (W.D. Tex., Jan. 13, 2014). The lawsuit seeks a declaratory judgment holding that the FTC lacks jurisdiction over MPHJ’s activities because, it claims, patent enforcement is not commerce; and that said activities are protected by the First Amendment. It filed the suit in advance of an anticipated lawsuit by the FTC, which had also been investigating it for alleged deceptive practices.