U.S. Copyright Office Most Likely Will Not Allow Photographer to Register “Monkey Selfie” 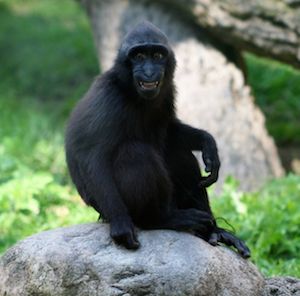 A famous “selfie” photograph taken by a monkey, using equipment set up by a photographer, is probably not eligible for copyright protection, according to the U.S. Copyright Office. The photographer has clashed with Wikimedia, which argues that he is not entitled to copyright protection and has refused to remove the photograph from its website. The photographer has argued that the photo could not have happened if he had not set up the camera. The Copyright Office holds that “human authorship” is a requirement for copyright registration. A few people have argued that the monkey is entitled to copyright ownership.

In 2011, British photographer David Slater was visiting a national park on the Indonesian island of Sulawesi. He spent several days in the jungle attempting to photograph a group of crested black macaques, a rare and endangered species of monkey. He described the monkeys as friendly and “inquisitive,” showing a great deal of curiosity about the various objects he brought with them. At some point, a macaque pressed the shutter-release button on a camera he had set up on the ground. Slater said that the monkeys took hundreds of pictures. Most of them were blurry, but a few were quite remarkable. A female macaque took the picture now famous as the “monkey selfie,” but not the one seen at left.

A user uploaded the photograph to Wikimedia Commons, an online repository of photographs and videos that are either in the public domain or available for use under a Creative Commons license, in July 2011. The picture also appeared on websites and in print media all over the world. Slater requested that Wikimedia remove the image from its site, claiming that he owns the copyright and that the availability of the image to anyone online has caused him financial harm. He acknowledged that the monkey took the photograph, but he argued that he is the owner of the copyright because he set up the equipment in a way that made the photograph possible.

Wikimedia has refused to remove the image, claiming that Slater does not own the copyright. It argues that a photographer can claim copyright over a photograph taken by an animal if he or she made “substantial contributions to the final image,” but that this would still only give the photographer “copyright for those alterations.” To date, no one has filed a court claim. According to the Telegraph, no court has ever ruled on the copyrightability of a photograph taken by an animal.

The Copyright Office released a draft of its Compendium of U.S. Copyright Practices, Third Edition in August 2014. It appears to address Slater’s dispute directly in Chapter 306, stating that the Copyright Office will register “an original work of authorship, provided that [it] was created by a human being.” It cites U.S. Supreme Court cases holding that copyright protection is limited to “original intellectual conceptions of the author,” Burrow-Giles Lithographic Co. v. Sarony, 111 U.S. 53, 58 (1884), that derive from “the creative powers of the mind,” Trade-Mark Cases, 100 U.S. 82, 94 (1879). Examples provided by the Copyright Office include “[a] photograph taken by a monkey,” “[a] mural painted by an elephant,” and “[a] claim based on driftwood that has been shaped and smoothed by the ocean.”

If you are dealing with a claim of copyright infringement in New York, New Jersey, or Connecticut, you should consult with the knowledgeable and experienced intellectual property attorneys at Korngut Paleudis LLC. To schedule a confidential consultation with our legal team, please contact us today online or at (212) 949-0138 in New York City, (914) 220-8270 in White Plains, or (203) 355-3635 in Stamford, Connecticut.